Remember that amazing moms’ conference a few of us wrote about? The next step is setting up mom meet ups in the Rochester area, places where moms can get connected, find support, and grow together.

As I was sitting drinking my Saturday coffee and going over the to-do list for the day, I realized that my mind felt less cluttered and calm rather than jumbled with racing thoughts. My mom refers to that jumbled thoughts feeling as….monkey brain. She says it’s when your mind is so full of thoughts, ideas, or whatever, that it feels like a bunch of tiny monkeys running around in your head. That pretty much sums up my brain the last few weeks.

I could blame the monkey brain and opposite of calm that I had been feeling on Christmas prep and life in general lately. Greg travels a lot this time of month so I often feel the extra responsibility from his absence. But when I thought about it, his work and travel schedule hasn’t bothered me. He loves his job which makes me thankful that he’s spending his time doing something he enjoys, and the boys and I pretty much have our routine running smoothly. Thankfully, my monkey brain wasn’t from the busyness of December, or our crazy family routine this month. Sometimes I actually think I thrive from strange schedules and random routines. Busy, not so much, but random and strange,bring it on.

As I thought about it, what was different is that I had not gone on Facebook in days. I’ve never been a big Facebook-er, but over the past few months {with my anonymous account} I had been going on local home school boards, favorite authors, or inspiring Facebook pages more often. I wouldn’t really participate or add in my comments on these pages, so I felt more like a voyeur, which felt odd and unnatural. I wanted to be aware of what was going on in case there was something we wanted to participate in, but yet I realized that I felt so much on the outside that I never felt comfortable jumping in. I started to feel the monkey brain starting as I wondered if I should go from anonymous to full in {on Facebook}. Even though I didn’t feel like all the events and things listed were necessarily things we would do, the thought of them still filled my brain. Honestly, it made me feel a little wonky {my word for not feeling myself}. 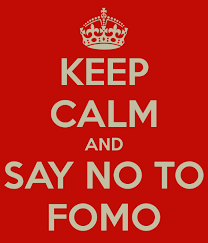 I’ve mentioned before about FOMO {fear of missing out}. Sadly, in my opinion, even though Facebook can be wonderful and bring old friends and family together plus a bunch of other great things….it can also have a negative impact. It can accentuate the FOMO and make you feel like your current life needs to be more. For me, the little I would go on to FB made me feel like I wasn’t doing enough or I wasn’t good enough or part of enough. It was telling me I needed to do and be more, and that I was failing, or worse-making me feel rejected. Don’t even get me started on the feeling of being left out after viewing something on FB. I have had more than a few friends share of hurt feelings or rejection after seeing photos or reading about something they wish they had been part of. Personally, I would actually find myself praying before going on FB hoping to not feel anything negative as I read or after I got off. Again, I had also been seeing/reading some wonderful things. The trouble is, there can always be a little junky-junk mixed in with the good, just enough to tarnish the good.

The truth is that what we read and the pictures we see on FB are not the full story.  I am very sure the reality of the actual situation doesn’t match the story we concoct in our head. Regardless, they are someone else’s stories, not mine or yours. I know I want to live MY story and not live vicariously through someone else’s. The best scenario is having whatever we view or read on Facebook or other places not affect us, to not let the heaviness of inadequacy or comparison weigh us down, to actually not even let comparisons happen.  The best thing would be to know that how our days are spent are just as they should be; kiss FOMO goodbye and replace it with the peace of knowing that what you do or don’t do is the best for you and your family. At least that is what I want.

So for the past several days I just stopped. I stopped checking in to FB and I fully became present in what was in front of me or on my calendar. Guess what I noticed? As each day went by, the monkey brain and gloomy feeling of FOMO faded away.  My world felt a little smaller, but it felt stronger and better. I believe the more I become grounded in knowing what is best for us, the more the other stuff won’t matter. I know this is true because it’s happening already. I’m feeling more clarity after just a few days. I’m not sure what to do from here. Maybe sometimes, the less you know the better? As far as Facebook, I’ve talked to several friends who have also shared that they were considering deleting their accounts. Is it an all or nothing thing? That’s what I’m trying to figure out. For now, I’m going to keep praying about it and pay attention to His guidance through it all. For now, I’m happy to say goodbye to the monkeys and hello to calm.

Isn’t that how the saying goes? We were in a hurry to get out the door, and I was stressed. We’re always in a hurry because I don’t do well with time management. I got up late because I’m trying to catch up on lost sleep from the past 4 months after our baby was born. The rest of the morning had me running around gathering things for the diaper bag, changing diapers, and making sure everyone was fed and dressed. Chaos and loudness were happening all around me. My volcano finally erupted. After I threw up with words all over my kids, I tried to calm down and just give in to the fact that we weren’t going to be early and maybe not even on time. I took a few deep breaths and resolved to talk quietly even if the lava was still bubbling inside of me.

Then it happened. Recently it so often does. One of my children mirrored my attitude and gave it back to me. I couldn’t correct him because I know I had created the frustration. Immediately I knew I had just witnessed my house falling down all around me. Proverbs 14:1 says, “The wise woman builds her house, but with her own hands the foolish one tears hers down.” When I thought to myself, “I just tore my house down,” I was filled with dread but also hope at the same time.

I knew I had made the wrong decision moments before, but I felt that God had pointed it out to me so I could correct it by responding a different way in the next few minutes. As I said, the lava was still bubbling. I remember talking very quietly and slowly as I fought my toddler’s kicking legs while trying to diaper him. As the baby cried and another child voiced their frustration, I raised my voice to say, “I’m trying really hard right now to not lose my temper. I’m choosing to take deep breaths, but believe me, I want to scream and yell, and if you continue to add to this bad attitude that’s in our house right now, I will.” Hey, at least I was being honest and showing my kids how to fight their feelings and thoughts, right?

Now let’s get back to the feeling of hope. God had shown me what just happened but that my house didn’t have to remain in shambles. After the “ouch” that came with correction, my next thought was, “His mercies are new every morning.” As long as my kids are living in my home, I have the opportunity to practice reacting with peace and calmness to the chaos they or myself bring to our home. Just because I tore my house down in that moment doesn’t mean I can’t choose to rebuild, even if I have to start over a million times. In Lysa TerKeurst’s book, Unglued, she coined a phrase that has been a lifesaver to me; “Imperfect Progress.” If I’m making steps in the right direction in between each step backward, I’m still moving forward; I’m still working at building my house.

Can I encourage you to not give up? No matter how many times you’ve lost it with words, thoughts, or attitudes, He offers a gentle reminder to make the decision to change course and start building again. Then when you have joy in your heart and see joy in your home you can smile, because you know that, “if Mama’s happy, everybody’s happy.”